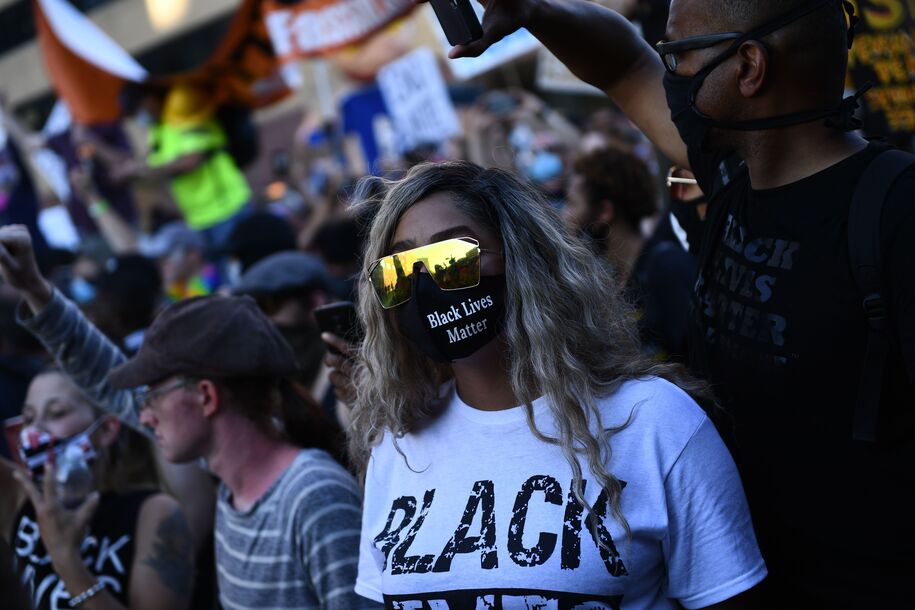 Every day for the past two months, protests against police violence have taken place in cities across the country with no signs of slowing down. While the uprisings erupted in the immediate aftermath of George Floyd’s death in Minneapolis, in some cities, the cries on behalf of people like Floyd, Breonna Taylor, and Tony McDade are being joined by less recognizable names as community organizers begin to demand that their local officials reopen past cases of police violence. Many of these names didn't receive widespread media coverage nor did they ascend to the national stage at the time of their murders, some of which occurred as long as six years ago. But now, organizers are hoping they will finally get the attention they deserved all along.

Last April in Oklahoma, Edmond police shot and killed Isaiah Lewis, a 17-year-old Black teenager. While Lewis’ family held a community forum to memorialize his life and discuss the issue of police brutality immediately after his death, widespread public outrage over his case has surged only in recent months. That outrage centers on both the lack of police transparency about what actually happened on the day of Lewis’ murder, and Oklahoma County District Attorney David Prater’s decision not to prosecute the officers involved. Prater announced last September that he could find no probable cause for charging them.

Oklahoma City native and aspiring civil rights attorney Adriana Laws heard about Lewis’s case last year, but in the wake of the uprisings and learning about the Freedom of Information Act, she has recently begun to request documents in the hopes of figuring out what happened.

“I've been in contact with friends of his, and I just started trying to reach out and figure out what the story was because there's so many discrepancies in the police reports and the 911 calls, and just things that don't match up with the details that were told by the witnesses,” said Laws in an interview with Prism. “I took an interest in it a couple months ago and I've just been looking into it since then as to what happened, what needed to be done, and what could be done now.”

Laws is the president of The Collegiate Freedom and Justice Coalition (CFJC), a social justice organization that organized a protest for Lewis on July 20. The event gathered community members at the Oklahoma County Courthouse and featured speeches by Lewis’ family.

Ultimately, the coalition hopes to see Prater reopen Lewis’ case. Meanwhile, Laws is trying to figure out how to get an independent prosecutor on the case and file a petition to move the case to a grand jury.

“Everyone's like, ‘This is the George Floyd movement, these are George Floyd protests,’ but not specifically,” said Laws. “He was the catalyst, [but] we all can understand, we all know that there were many people slain by police before him and a lot of them weren't even talked about, like the ones here in Oklahoma. There are so many cases I'm learning about that I never even heard of.”

The energy around Floyd’s death has also catalyzed organizers in other cities to take on other cases of police violence that were swept under the rug, leaving the truth unexamined and families without any semblance of closure.

In Wilmington, Delaware, protests sprang up earlier this month calling for the Department of Justice (DOJ) to reopen the case of Jeremy McDole, a 28-year-old Black man whom police shot while he was in his wheelchair in 2015. In response to protesters, the DOJ says the officers were protected at the time under a Delaware law that permitted police to use deadly force when believing it necessary, “even if the belief was reasonable or unreasonable.”

The push for increased accountability in old cases is also taking root in counties that have elected purportedly progressive prosecutors. Since June, a group of community organizers in Bexar County, Texas, has been calling for Bexar County District Attorney Joe Gonzales to reexamine the cases of three Black men: Marquise Jones, Antronie Scott, and Charles Roundtree who were killed in 2014, 2016, and 2018 respectively by San Antonio police. In all three cases, the police were not charged. Even now, with the surge of unrest and interest in reexamining the cases, Gonzales has announced he has no plans to reopen them unless new evidence is brought forth.

Similarly in Massachusetts, Suffolk County District Attorney Rachael Rollins has found herself the target of Boston-based protests calling for the reopening of the cases of Usaamah Rahim and Terrence Coleman.

Boston law enforcement shot and killed Rahim in 2015 after placing him under surveillance for alleged terrorist activity—a portrait of him that his family and loved ones dispute. In 2016, Boston police shot Coleman twice after his mother called paramedics for him as she says he suffered from paranoid schizophrenia. At a rally held last month, Coleman’s mother said tearfully, “I said, ‘I didn’t call for you. I called for the ambulance.’”

In some cases, the return to past cases has ignited broader public interest and allowed stories that could have been forgotten to ascend beyond local communities and onto the national stage. This is particularly true in the case of Elijah McClain, the 23-year-old who was stopped last August by police in Aurora, Colorado. Mclain was placed in a carotid hold, injected with ketamine, and suffered a heart attack, ultimately dying within days. While McClain died almost a year ago, his story has only now received renewed attention following a successful petition launched on Change.org that garnered over 4.6 million signatures and inspired people nationwide to place calls to the Aurora district attorney and file complaints against the county police department.

“We have every right to be angry”

In many ways, these cases have returned to the public’s attention because the longstanding cries of family and friends are finally reaching a public that is more receptive to stories about police violence, but they are also being uplifted by everyday people curiously digging into the past. One tool that has been particularly useful for organizers like Laws has been Mapping Police Violence, an online database collecting information on known police killings occurring since 2013. The site allows users to analyze the geographies of where these killings have taken place and how many were committed each year.

According to the database, Oklahoma ranks third in the list of states with the highest annual police killings rate, following behind New Mexico and Alaska. That finding is a part of why Laws feels that protests against police violence in her home state have become so strong and sustained. The database has also produced a jump off point for her own research into past cases of police brutality.

“I feel like we have every right to be angry, and those older cases that might not have got the light shined on them that they deserved then? They need to be brought up now,” said Laws. “Justice needs to be pursued. There's a statute of limitation on crime for a reason. If we're not past that then why not go back and prosecute the officers or whoever was involved?”

That process of returning to, uncovering, and uplifting past cases are only a part of the work Laws does with the CFJC. The group, which launched at the end of May, has been hosting rallies featuring local political candidates and state senators, running teach-ins and know-your-rights workshops, and connecting recently arrested protesters with lawyers who can represent them. CFJC also uses research on past cases to identify issues within the Oklahoma City justice system and craft policy proposals and new campaign demands that would address them, like calling for the demilitarization of the police and ushering in new provisions around the use of body cameras.

In partnership with other Oklahoma-based groups, CFJC is demanding that Prater drop the charges against protesters, some of whom have been charged with acts of terrorism that can carry bail amounts of $1 million, end cash bail, eliminate qualified immunity, reopen Lewis’ case, and ultimately resign from office. For Lewis’s case in particular, the group is planning to work with human rights advocates and legal professionals to coordinate next steps and petition for a grand jury. Laws says this “behind the scenes work” will be done in coordination with public events aimed at keeping Lewis’ name out there, and hopefully not forgotten.

Tamar Sarai Davis is the criminal justice staff reporter at Prism. Follow her on Twitter @therealtamar.
Follow us on social for stories the mainstream media isn’t covering.
Want to support a new type of media outlet? Donate to Prism today. Our 100% women of color-led newsroom challenges toxic media narratives.
Donate Now →
Stories that challenge the status quo - right in your inbox.