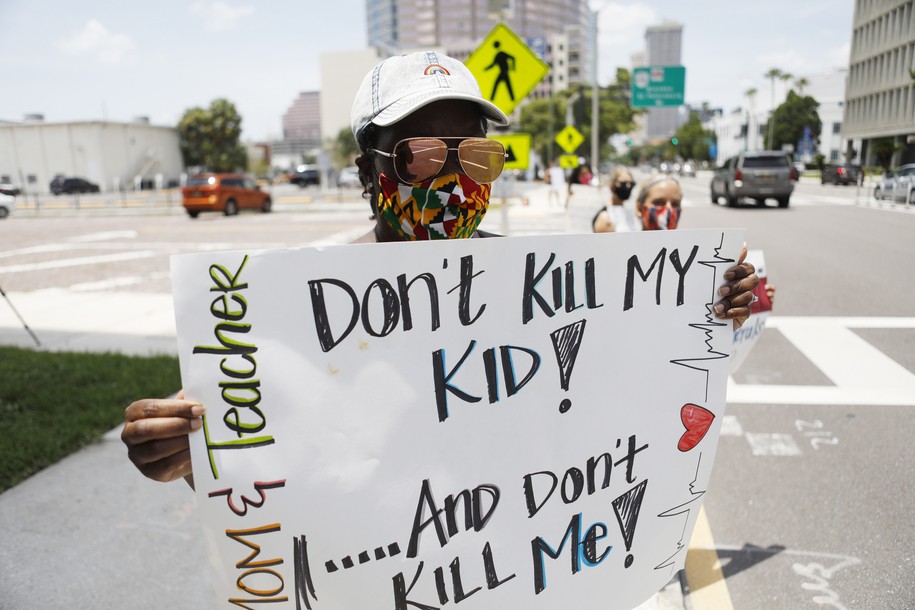 As the new school year gets ready to kick off, school districts across America are faced with what appears to be lose-lose situation: Do we have in-class instruction and put the health of our students, faculty, and staff in jeopardy, or should we stick with online learning and risk having an entire generation of students suffer academically?

Despite murmurings of a nationwide teacher strike over the lack of safety precautions and state guidance for reopening schools, most educators are preparing for the reality that in order to keep their jobs, they may be forced to put their lives and the lives of their students at risk. Teachers in urban school districts have the added pressure of working with a large number of low-income students who already face inequities and obstacles in the education system.

School districts around the country have decided on a variety of different learning options for the fall: in-class instruction, distance learning through homeschooling and online teaching, and in some cases a hybrid version of the two. But no matter what school districts decide, teachers—especially those who teach a large number of low-income and at-risk students—are feeling less prepared to enter the new school year than ever before.

Prism spoke with several teachers from across the country to get their take on how they think distance learning went in the fall, gauge how they’re feeling about entering the new school year, and get their thoughts on what they'd ideally like to see happen in order to keep themselves and their students safe.

“Melinda,” who has asked to use a pseudonym in order to protect her job, is a high school English teacher in Worcester County, Massachusetts, the state’s second-largest school district. She works in a school with a predominantly Latinx student population and a large number of low-income teens.

“I can’t in good conscience remain silent about what’s happening,” she said.

Her school district recently evaluated the effectiveness of distance learning through a survey-based evaluation. Less than 2,000 of the county’s 25,000 students filled out the survey, which sought to examine the reasons for the low student engagement for online learning in the spring. Melinda said the school district’s decision to eliminate grading for the remainder of the spring semester is to blame for the lack of student participation. After almost two months of distance learning in the spring, students and staff in the school district were notified via robocall that grading for the fourth quarter wouldn’t count toward their grade-point average. The fourth quarter had already kicked off weeks prior, so Melinda said students and teachers felt “sucker punched” after learning that all the work they had done was for naught.

“[The school district] said, ‘Well, not every student has access to the internet or a computer, so we can’t give out any type of grade whatsoever,’ but I had almost total participation before that announcement was made,” said Melinda. “My students are very creative. They used a tablet or their phones or their parents’ phones. They found a way to do it because they wanted to be engaged until they were told, ‘Oh, this doesn’t count.’”

Melinda said many of her students have jobs that are deemed essential, so when the district opted to remove grades, some of her students decided to stop doing the home assignments and instead pick up extra shifts at work.

“[Distance teaching] is emotionally draining and it’s exhausting,” she said. “One morning I woke up having a full-blown anxiety attack because the stress was so great, but I knew I had to hold it together for my students.”

Over the summer, Melinda’s school and at least one other high school in the district were used to house homeless people with the coronavirus. The Worcester County school district hasn’t yet released the plans for the new quarter, but Melinda has some fears about the safety precautions—or lack thereof—that will be put in place if in-person instruction resumes. To prevent an outbreak, she said she thinks the school will likely release a plan to keep students separated and in masks and rely on students to disclose whether they have recently tested positive for the coronavirus.

Looking ahead to the new school year, Melinda thinks any form of in-class learning would be a mistake since students and teachers can’t realistically space out in a crowded classroom. Though she realizes distance learning can be challenging for students, parents, and teachers, she believes it’s the most effective way to keep everyone safe for the time being. Instead of expecting students to stay engaged with a computer for an entire school day, she thinks more structure around distance learning, going back to a grading system, and requiring a scheduled check-in time with teachers would promote student engagement and keep people enrolled.

Without more structure, “I’m worried that kids are going to drop out of school so that they can work,” she said.

Perhaps most important, Melinda wants school districts to make a habit of asking teachers what they think will work best for their students—something she thinks her own school district hasn’t done enough.

“It’s just very insulting when you feel that strongly about your students and you’re not even being asked what works,” she said.

Even if in-class instruction resumes in the fall, regardless of the lack of precautions, Melinda says she and many of her colleagues still plan to show up.

“I have to be there,” Melinda said. “I have no financial ability to say no. [Teachers are] broke. We’re living paycheck to paycheck. I know some teachers who have filed for bankruptcy. We just don’t have the money. We’re trapped.”

Ashley, a kindergarten teacher in Oklahoma, primarily teaches Black and Latinx students. She said her district pushed back her school’s start date to Aug. 31 and plans to hold some in-class instruction with virtual time mixed into the schedule. They’ve also built “flex days” into the school calendar in case the school decides to take longer breaks between in-class instruction.

“Everything feels unclear right now, and I believe our students are at a disadvantage due to systemic racism and economic disadvantages,” Ashley said. “I believe that my district is doing the best they can. I believe it values our students, families, and staff. But I also am concerned that there just aren’t enough resources to keep us safe.”

When students do return to school, Ashley said she still has questions about what kind of protections will be put in place for teachers and their students. As far as she knows, her school’s nurse doesn’t have enough thermometers to check the temperatures of each student, and she still isn’t sure if the district will have the resources to provide enough hand sanitizer and masks. Going virtual isn’t an excellent choice either. When her school switched to distance learning in the spring, she quickly noticed students falling behind.

“So many [students] couldn’t log on to join our class or they didn’t complete the assignments,” she said. “This wasn’t because families didn’t care, but because they didn’t have access to the internet or families worked and there was no one to help the student log on. If we went virtual this fall, this would be a major concern. I don’t want my students to fall anymore behind, especially if they already aren’t on grade level to begin with.”

Fortunately, she said many internet providers in her area offered discounted rates, easing the burden of transitioning to at-home learning. As her school district prepares to begin the new school year, Ashley said safety should be the top priority. Despite the challenges with distance learning, if it were up to her, schools would go all-in on online learning in the fall.

“So much of this back-to-school debate has focused on students and how much less likely children are to get sick,” she said. “However, children can and have become very sick from COVID-19. Aside from the kids, I value my and my co-workers’ health and lives. Admin and teachers’ lives matter, as do the rest of our staff. Our secretaries, custodians, and cafeteria staff make little and are not on salary.”

Chip is a seventh grade teacher at a Title 1 school in Norristown, Pennsylvania, which has a minority-majority student population. Last spring, not long before his school switched to a distance learning model, the father of one of his students died from the coronavirus. Like other teachers, Chip has several concerns about heading back to school in the fall. When he spoke with Prism on July 23, Chip said his school had decided to give parents and students three options for learning: full-time virtual instruction, full-time in-class instruction, or a hybrid version of both where students would attend class for two days, then do virtual learning for the other three days.

“[Teachers are] almost being forced into this situation,” he said. “I feel like teachers, who were widely appreciated back in March and April and May, are kind of being told, ‘Hey, you know what? We appreciate you, but you need to risk your life.’ That a heck of a position.”

Chip’s concerns about in-class learning echo concerns from other teachers, but his family situation puts him at an even higher risk. Chip’s family is involved in three different school districts: His wife works as an administrator in a neighboring school district and his children attend school in a separate district. The possibility of one member of his family being infected and then carrying it to other school districts is a real possibility, and it’s something he has on the back of his mind as the new school year begins.

“Let’s say someone riding the bus with my son has COVID, then it gets spread throughout his school. Then, my son brings it into our house and I then go and take it into my 150 students that I see in a two-day span. If I get tested today, it could take anywhere from 10 days to two weeks to get the results. You’re looking at two full weeks of exposure…My 11-year-old told me, ‘I’m not really comfortable going back,’ to which his mom and I had to tell him, ‘We have to work. We don’t have a choice.’”

The parents of Chip’s students are in a similar predicament.

“My problem is that in the district that I teach, I have a lot of parents who need their kids to go back to school so they can work, which means that I have to go back to teach in order for my kids’ parents to work, whether or not people feel safe about it,” he said.

Regardless of his challenges with distance learning, he says in-class instruction should “absolutely not” resume in the fall.

“As a common sense safety factor, I feel like we need to go virtual until at least winter break,” he said.

Not long after his conversation with Prism, Chip’s wish became a reality: This week, his school district decided to change course and go all virtual until at least January—a move he said was “fantastic” and will now allow him to keep his sons home from school.

“I have some concerns about [students falling behind] obviously, but we can always catch them up,” he said. “We can’t bring them back to life.”

This article is the first piece in Prism’s education series, which will roll out throughout the month of August. Be sure to check back for new stories about teacher retention problems in Black and brown school districts, homeschooling, funding concerns on reservations, and more.

Carolyn Copeland is a staff reporter and copy editor at Prism. She covers racial justice and culture. Follow her on Twitter @Carolyn_Copes.
Follow us on social for stories the mainstream media isn’t covering.
Want to support a new type of media outlet? Donate to Prism today. Our 100% women of color-led newsroom challenges toxic media narratives.
Donate Now →
Stories that challenge the status quo - right in your inbox.