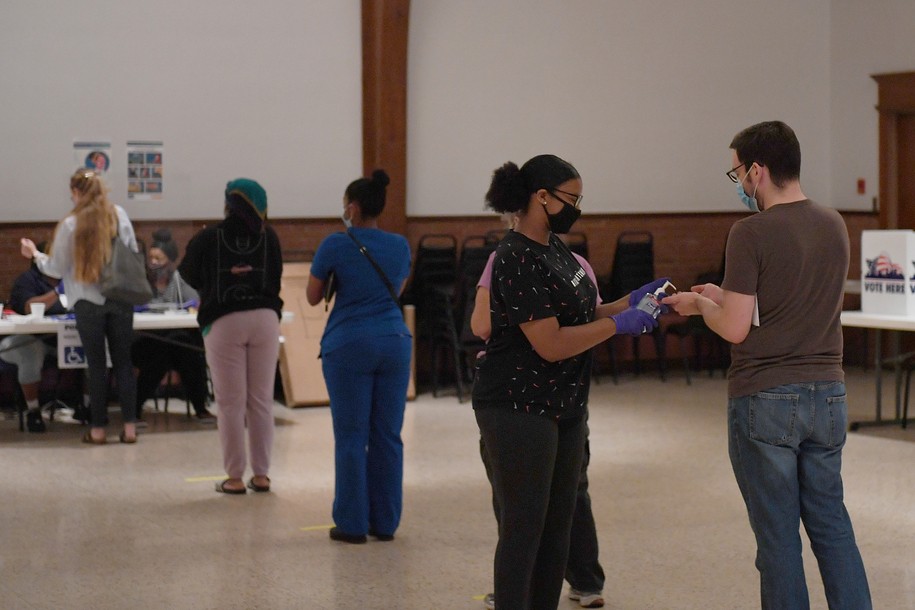 Youth are stepping up to work the polls on election day, addressing the poll worker shortage that has plagued the primary election cycle. Often overlooked, poll workers are an essential component to election administration. They set up and close polling places, and are responsible for protecting ballots and voting equipment.

For young organizers like Evan Malbrough, this is an organizing opportunity to get more young people engaged in civic life, as well as provide an opportunity for employment. “I officially started the Georgia Youth Poll Worker Project in order to address that issue through the employment of young people,” said Malbrough.

Recognizing the capacity issues facing metro-area counties, Malbrough stepped in to fill the void.  A recent graduate of Georgia State University, Malbrough reflected on his past experience in organizing a student run polling location on the Atlanta campus as part of the impetus for starting his organization. Malbrough was then tapped by the county to serve as a poll-worker for the June 9 primary election.

“Staffing is almost the most essential aspect in our democracy, but it doesn't get as much attention,” Malbrough said. “Our goal is to have 5000 young people become poll workers by November.”

To date, the Georgia Youth Poll Worker Project has recruited over 500 young people, ages 16 and up, to work in several metro Atlanta area counties. “What we do is we build relationships with the county, and then send them a [targeted] list of who in their areas wants to be a poll worker,” Malbrough said. Poll workers are being provided training and PPE, along with hazard pay in some cases.

The rapid spread of the COVID-19 pandemic saw many poll workers declining their tour of service due to the potential for exposure. Poll worker shortages during the primaries led to closures and consolidations of a critical mass of polling locations causing long lines and wait times for those voting in-person. In the 2018 election, nearly 60% of all poll workers were over 60.

Nationwide organizations are investing in, encouraging, and recruiting younger people to step up and become poll workers. As previously reported by The Fulcrum, young people engaging in the electoral process as poll workers could lead to increases in civic engagement. A collaborative effort of several national nonprofits and corporate partners, Power the Polls seeks to recruit 250,000 people to sign up to be poll workers.

“All of us were really motivated by what we saw happen in the elections following the COVID-19 pandemic in Georgia, Wisconsin, and places like that [had] huge drops in the polling places, and then consequently huge lines and more opportunities for people gathering,” said Scott Duncombe, director of Power the Polls and founder of Pizza to the Polls. “The need became really clear as we watched what happened in elections [where] there's no intervention and the vast majority of workers, who are at risk, don't show up.”

Targeting 10 states along with municipal areas like Philadelphia and Milwaukee, Power the Polls  is working with election officials and some corporate partners to make sure people have PPE along with other necessary equipment to safely serve. Duncombe sees Power to the Polls as a way to shift the poll worker pool to younger people who are “digital natives” and possibly more likely to be comfortable resolving technology issues as they arise at the polls. “They really are sort of ambassadors, and that's one reason we are excited about recruiting the next generation of workers who are younger and at a lower risk of COVID-19 outcomes,” he said.

“Poll workers are the linchpin of democracy,” said Benavidez, “They’re so critical [to] the election.”

Anoa Changa is the electoral justice staff reporter at Prism. Follow her on Twitter at @thewaywithanoa.
Follow us on social for stories the mainstream media isn’t covering.
Want to support a new type of media outlet? Donate to Prism today. Our 100% women of color-led newsroom challenges toxic media narratives.
Donate Now →
Stories that challenge the status quo - right in your inbox.